15 mountain climbing movies and documentaries you must not miss

15 mountain climbing movies and documentaries you must not miss 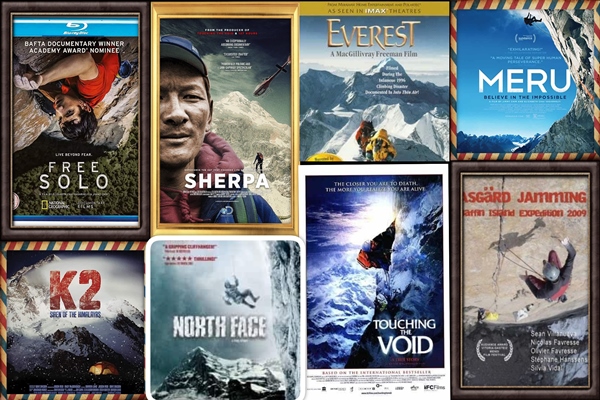 For last week or so our central and states govt were unanimously in favour of extending the lockdown in India. Finally today the announcement came. As expected Lockdown 2.0 will continue till 3rd May 2020. Despite the distress it caused, it is the only available option to us for the time being.

For many of us, it took days and weeks to absorb the initial shock. It is not easy to impose a self containment of this degree, that too without much preparation. But at the same time we sense a silver lining, as social distancing and lockdown are showing positive signs.

During this pandemic , most of us are getting an opportunity to spend good time with family. Additionally leisure time for ourselves to deal with! Why not use this time to watch some inspirational real life stories from mountains around the world?

Yes, these are real events not any fiction. Albeit some events, people or dramatisation added for the big screen. The list includes the very best of mountaineering or alpinism skills and exhilarating adventures. Also some finest big wall climbing and super sporting feats. The passion and motivation, harrowing pain and fight to survive, ones ability to challenge the self, all are real and often beyond human capabilities.

Here is our first attempt to list 15 such movies and documentaries based on mountains all over the world. It includes experiences of Himalayas to Karakorum, from Andes to Patagonia, from arctic to antarctic. The order is just for numbering purpose only.

Note: Some films are rated “R” (restricted viewing) for their language or nature of the content. Some of the films are available on Netflix or Amazon Prime. Also you can search for full videos on YouTube or Vimeo as well.

Alex Honnold attempts to become the first person to ever free solo climb El Capitan, Yosemite valley, California. This is an incredible biopic of extreme climbing.

Two elite and highly accomplished climbers Conrad Anker and Jimmy Chin team up with a relatively fresh Renan Ozturk in 2011. Its a story of their individual and team struggle to find their way in attempt to climb Mount Meru, via the unclimbed Shark’s Fin route, in Garhwal India. It is one of the most coveted prizes in the high stakes game of Himalayan big wall climbing.

In 1985, two adventurous young mountaineers, Joe Simpson and Simon Yates, set off to climb the treacherous west face of the Siula Grande in the Peruvian Andes. This is a real story of extreme human endeavour and survival.

Legendary high altitude mountaineer Reinhold Messner pushes himself along with Peter Habeler to the limit in achieving the first successful summit without the use of supplemental oxygen.

Between 11 and 14 August 2009 the German brothers Thomas and Alexander Huber carried out the first redpoint ascent of Eternal Flame, the legendary route up the South Buttress of Nameless Tower, Trango, Karakorum, Pakistan.

In an unbelievable story of perseverance, free climber Tommy Caldwell and Kevin Jorgeson attempt to scale the impossible 3000 ft Dawn Wall of El Capitan. Arguably this is the hardest big wall free climb.

This breathtaking film follows an historic attempt to summit the world’s most challenging peak on the 100-year anniversary of the Duke of Abruzzi’s landmark K2 expedition in 1909. World-class alpinists Fabrizio Zangrilli and Gerlinde Kaltenbrunner team up with veteran climbers Jake Meyer and Chris Szymiec in a dangerous foray of high altitude mountaineering.

First ever IMAX filming on Everest during the notorious 1996 climbing season. This is the expedition which safely completed their filming despite the tragedies happened during the shooting.

This is based on a true story during the prelude of WW II. Nazi propaganda urges the nation’s alpinists to conquer the unclimbed north face of the Swiss massif – Eiger

Nicolas Favresse, Sean Villanueva, Olivier Favresse, Stephane Hanssens and Silvia Vidal are a team of highly skilled climbers with one common goal: Free climb the North-West Face of Mount Asgard on Baffin Island, arctic Canada. 45 days, 600 Km on foot, 11 days on the vertical granite wall, this is a serious business filled with fun.

A documentary on the unsung heroes of the mountains. Mount Everest’s Sherpa community share their experiences of the deadly avalanche that struck on 18 April 2014, killing 16 of their members, and how they coped in the aftermath.

Set against the backdrop of breathtaking Patagonia, David Lama, the worlds youngest climbing world champion, sets out to climb an unfathomable route on Cerro Torre, a mountain once said to be the most difficult in the world.

A drama about the tragic Nanga Parbat expedition by the two Messner brothers in 1970, on which only one of the brothers made it back to their base camp alive.

A documentary of the 1970 British Expedition led by legendary Sir Chris Bonington up the South Face of Annapurna, Nepal. It was the first of its kind to take a deliberately difficult route up the face of an 8,000-metre mountain.

In December 2008, Alexander and Thomas Huber, better known as the ‘Huberbuam’ , together with Stephan Siegrist, climbed Ulvetanna and climbed the west face of Holtanna for the first time. Technical difficulties, extreme cold and incredible dimensions make these fascinating mountains one of the most demanding but also most beautiful challenges worldwide.

What are the mountain movies in your bucket list? Let us know in the comments 😎 .