HIMALAYAS: The Water Reservoir of the (Indian) Subcontinent

Home » Environment » HIMALAYAS: The Water Reservoir of the (Indian) Subcontinent

HIMALAYAS: The Water Reservoir of the (Indian) Subcontinent 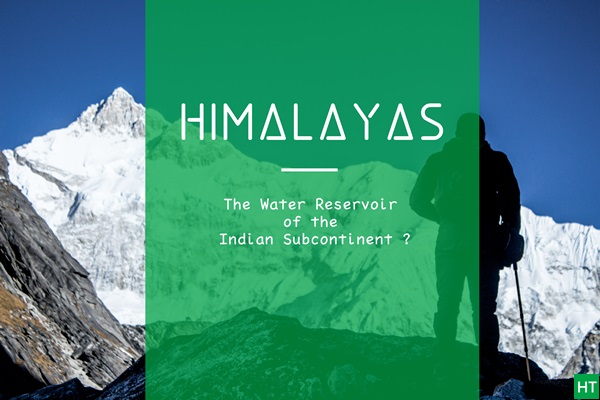 Himalayas, the 2400 Km long and 250-300 Km wide mountain barrier separates the Indian subcontinent from the mainland Asia. This insuperable barrier stops the cloud from going North and is responsible for the peculiar Monsoon cycle of the subcontinent. However, in today’s discussion we are not going to take that into account and see how the water stored in the lakes, rivers and glaciers of the Himalayas directly effect the lives of the people of the subcontinent. Stay with me. Next we’ll see if at all we this magnificent giant deserves the title of the “Water reservoir of the Indian Subcontinent” or not.

Nearly 60% of India’s population lives in the densely populated Indo – Gangetic plains. Approx 1,20.00,000 million cubic meters of water flows down the Himalayan rivers annually and nourishes the millions living in the plains.  Believe it or not this huge amount of flowing water has tremendous power potential. Nearly 2,46,600 million cubic meter from these river can be utilised in irrigation process. In table 1.1 we’ll see the potentials of three major Himalayan river systems supplying the juice of life into the subcontinent.

This almost inexhaustible source of fresh water gets replenished every year by direct rainfall & the melting of snow and ice which occurs in the higher altitude. The average rainfall in the whole Himalaya is ~289 cm (https://en.climate-data.org/south-america/ecuador/provincia-de-orellana/himalaya-179049/), though it varies from one region to other within Himalayas.

The average rainfall is ~240 cm/yr in the southern front, ~150 cm/yr in the most populated belt of the Himalaya (1500  – 2500 m) i.e. in the Lesser Himalaya region. The Himalayan domain ( 5000- 8000 m) experiences a surprisingly high but unpredictable rainfall pattern ranging from 240 cm to 350 cm annually where as the arid Tethys domain across the Great Himalaya in the North  faces very little rainfall (10-15 cm/yr).

The major portion of the rain water flows down the valleys in the short duration of monsoon (more or less three months) and only a small part (less than 15%) percolates down through the soil and rocks to rejuvenate the mountain springs  which essentially feed the major Himalayan rivers systems.

Although major chunk of fresh water reserve, is locked in the 1400 Km3 of snow and ice, spread over 33,050 Km2  of area (Dyurgerov and Meier, 2005).  This is in higher altitudes above the snowline, which varies from 4300 to 5800 m depending on latitude and other factors). More than 15000 glaciers of various size contribute to this.

All these statistics may not be meaningful. Let me present it another way to put things into perspective.

The Ganges-Brahmaputra-Meghna basin itself is home to more than 700 million people, which is twice the population of the United States. It relies solely on this river system for daily need of fresh water (global-greenhouse-warming.com/himalayan-gangotri-glacier.html). If we take into account the water flowing down from the whole Hindukush – Karakoram- Himalaya (HKH) range, number increase. Estimated 1.9 billion people rely on this for drinking, agriculture, energy and other purposes. Simply meaning,  more than two out of every ten living human being of the world is dependent on the water stored in the Himalayas in one way or the another.

Now you tell me if there’s any exaggeration when I name this mighty giant as the water reservoir of the subcontinent?

To our utmost regret,  this great treasure is under formidable threat. Recent study shows that one third of the Himalayan glaciers will melt by the end of this century . If precautionary measures are not taken Himalaya might lose two third of its present glacier caps. This is a discussion for another day and will take me at least another blog to give you the briefest idea about what is happening.

Rhik
Rhik works as a new route explorer, photographer and trek coordinator for HT. He completed his BMC from HMI and AMC from NIM.
Previous postRoopkund: Revelations about the skeletons
Next postClimbing in Lalung valley: Trijunction of Kishtwar, Suru and Zanskar