Sahastra Tal: An attempt during heavy snow in summer

Sahastra Tal: An attempt during heavy snow in summer 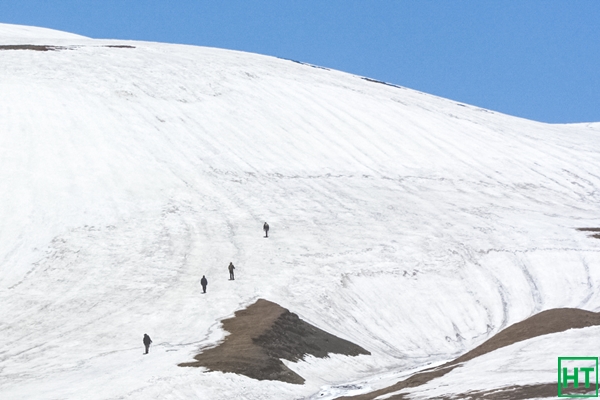 Note: Due to heavy residual snow the team was unable to reach Sahastra Tal in first half of June, 2014. They had to return around 5 Km before Sahastra Tal. Final camp was set at Kyarki and  snow patch started beginning from this area. The team took a different longer route from Kush Kalyan to Belak and Budha Kedar while returning to spend the day saved. For standard itinerary follow Sahastra Tal trek details page, which is the normal route. Also the altitudes on trail we rerecorded by author with his Garmin watch which may have calibration issue. Consult the trek details page for more accurate altitudes and distances.

Photos are taken and shared by author.

When HIMALAYA TREKKERS proposed Sahastra Tal trek to me, I felt that I should not miss the opportunity. It is a less frequented route and had a lot to offer. Especially I hoped to walk over ice fields for the first time. So fully prepared to face the challenges I reached Hardwar where I joined my fellow trekkers. After a long dusty road journey we reached the village Malla (1500m) leaving behind the destructions that were caused by the devastating flood of 2013.

On the first day of trek we passed by the beautiful Sila village (2000 m) and reached first camp site called Gairi (2400m) after a long walk. There was still some sunlight left. The place was surrounded by woods with a clearing in the middle. There were also some small huts used by the cattle grazers. As the darkness started to fall and the moon coming out, the place felt cold suddenly. The next day woke up early in the morning and got to see the snow covered peaks for the first time. I was also lucky to spot several birds including a Himalayan Wood pecker that I had never seen before.

We packed up after breakfast and started our trek. The route started through the forest. As we gained altitude we came across small meadows and beautiful yellow flowers covering it. Also the huge snow clad peaks were on our left. Overall it was nature at its best. We crossed over Chuli La pass (3500 m) and after a long walk we finally reached our campsite known as Kush Kalyan (3400 m). At this altitude tree line was almost gone. This campsite was also nice having a small stream flowing by our tents.

The next day of trek was till Kyarki campsite (4035 m) and it was going to be a tough walk. We started early. Initially we walked along the ridge and then crossed a large meadow. From far  across we could see white dots along the green mountains. They were hundreds of sheep and goat mostly white in colour. Walk was easy till until now. Then the ascend started with the green grass disappearing fast giving way to the dry dead grass and rocks. Trying to negotiate the boulders we came across first glimpse of hard ice and snow on the way. The path was broken with loose soil and solid ice everywhere. We had to cross it very carefully. But after this tough part came a nice surprise. Just as we took a turn the huge snow covered mountains were visible. We were informed that we can expect a lot of snow on the way to the tal. My wish of walking over snow was a reality now. Ahead of us appeared the first snow field. With the snow melting, it created a muddy slippery path. Few slipped, few worked around to find a safer way, but ultimately we reached our campsite with some bit of sun light still left. Tents were pitched just by a stream. Our guide and Sapta da climbed over the ridge to check for the possibility of going further from here. With the sun going down behind the ridge the wind started and we felt pretty cold. There was a bad news to follow. The way ahead was totally covered by deep snow. The team didn’t have much experience of snow and it seemed that all of us can’t make it till Sahastra Tal. After a long discussion with the guide Ramesh Ji, finally only three of us decided to go up to Lamb Tal and return back on the same day. Chance of reaching Sahastra Tal was bleak…

It was a nice clear day.  Equipped with the proper gears to walk over the snow we began to climb. First was a steep slope with some snow and rocks. Once I reached to the top it was an amazing view. There was a frozen river to cross and looming ahead were large ice fields. We reached Lamb Tal (4268 m) around noon. There was snow everywhere and the lake was hardly distinguishable from the surrounding. Sahastra peak was visible at some distance. Our guide performed puja there.  We took rest and had our lunch. By this time weather was starting to degrade.   So we decided to descend as quickly as possible. But there was something more that nature had in store for us. We could spot a Himalayan fox in the opposite mountain slope. By the time we were about 3 km. from our camps, cloud had already gathered and thunder roared nearby. Soon it started to drizzle and snow along with cold wind. We somehow managed to reach our tents. Snow continued for an hour or so but amazingly by the evening sky was clear and we had moonlit sky. But the best news came from the kitchen tent that dinner with mountain goat meat was ready.

We started to descend the next day and reached Kush Kalyan very easily. The following day we descended further down crossing across very large meadows until we reached Belak village (2972 m). Here as soon as we pitched our tents there was a heavy downpour with hailstorm. But it resided soon after giving way to a clear moonlit sky.

The next day morning was sunny and we posed and clicked group photos at our last campsite. We descended further through the forests and after long walk we finally reached Jhala where our car was waiting.

Surprisingly throughout our trek we did not come across any other trekkers, exactly the type I wised.   The route was full of surprises and challenges. We came across forests, huge meadows, large snow fields, frozen rivers, frozen lake, white peaks and not to forget rare opportunity of getting glimpse of the Himalayan wild life. The arrangements were outstanding, guide and support stuffs were top class, making it one of my most memorable trek till date.

Sarthak Adak
Sarthak is a software professional based in Bangalore and loves to trek specially on the less trodden trails. His grew up on mountains in Darjeeling and has a special bonding with the Himalayas.
Previous postPacking a Rucksack
Next postSikkim earthquake – Goecha La trek updates