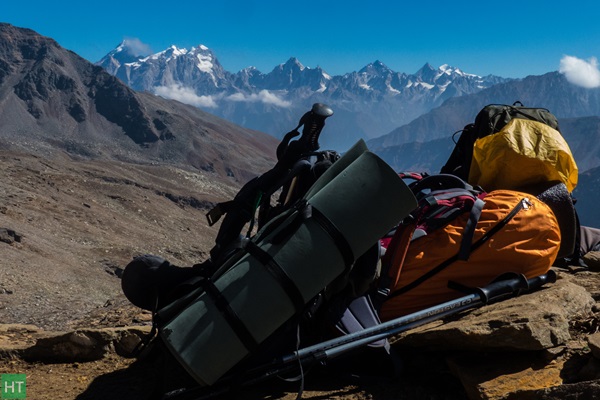 I’m not much of a trekker. I have been to some hikes in nearby hills of Bangalore but that doesn’t qualify me to say that I am a trekker.  But Himalayas attract me!!! As a tourist wherever we have been, there was Himalayas.

So after slogging day and night for nearly 1 year when our project was finally over in may and I decided to go for a trek to Himalayas. This was going to be my first “Big” trek. I called up my friend who had been to Roopkund with HIMALAYA TREKKERS (HT). He suggested that I go with them.  I didn’t think much and gave a call to Sapta.  They were planning Rupin pass trek in September.  I was a bit sceptical after I confirmed the trek whether I’ll be able to do but my friends had more confidence in me.

I booked the tickets from Bangalore to Dehradun for 28th Sep and Chandigarh to Bangalore for 7th Oct. Luckily I got a pretty good deal. Universe was working with me!!! One of my friend Reetu from office also joined me.

Reetu and I reached Dehradun on 28th September. 6 members of the group had already reached Dhaula and remaining 5 of us had to go to Dhaula on 29th Sep.

we started in a private vehicle around 7:30 in the morning. Route from Dehradun to Dhaula is a scenic route. We reached Mussoorie around 9 and did our breakfast somewhere close to Kempty falls. I was coming back to Mussoorie after 20 years. From school we used to come for a 1 day trip to Mussoorie. The route is same as Yamunotri till Naugaon.  People like me who have seen the drain-water Yamuna in Delhi was surprised to see crystal clear Yamuna flowing alongside the road.

We stopped for lunch at Purola. We spent couple of hours there. From Mori, it was Tons river not Yamuna, Yamuna’s largest tributary and went beside Tons till Netwar. Tons river starts at Netwar and is confluence of Supin and Rupin river. When we finally reached Dhaula at 5 pm we were alongside Rupin River. Our tents were already pitched close to the river Rupin. The sound of river was so loud that there was no other sound other than the burbling of Rupin.  Rupin was going to be our companion almost till the end.

I am an early riser in any new place otherwise I sleep for 9-10 hrs. Woke up around 5:30 am. Freshened up and made myself comfortable in a stone near the river. Had my me time for some time.  We had nice breakfast and then started around 8:45 from Dhaula.

First day of the trek was a pleasant walk along the Rupin valley. After some time Rupin river was around 500 ft below us and had fanned out into a wide river bed. The weather god was nice with us. There are many villages on either side of the hills.

We reached a village called Seva around lunch time. Had our packed lunch.  There was home-cum shop run by a nice family nearby. A young girl there (her name was Raveena) took our order for tea and biscuit.  We had a nice time there. Though it was a weekday we were surrounded by many school going kids.

We passed by the famous Seva temple (Kinnaur style) and walked another hour to a place called Aligad. We reached camp-site by 3 and had the remaining day to ourselves. I was feeling pretty good after the walk.

We started around 8:30. It was going to be a long walk.  There was a decent uphill for about 1/2 hr through forest and then 6 km walk along the road connecting Uttarakhand to Himachal. Weather God had blessed us today too. It was nice and bright sunny weather.  Rupin-river was flowing to our right side around few hundred feet below.  In between we crossed uttarakhand and had entered Himachal Pradesh. We had nimbu achar maggie just before entering a village called Jiskun. Always nice to see when people try to do improvisations in ordinary things like this nimboo achaar maggie. There was electricity in villages of Himachal unlike villages in Uttarakhand.

Had our lunch at a river bank and then again there was a uphill  for another hour for the hanging village-Jakha.  It started drizzling after some time which became a heavy rain after some time but few of us had reached the homestay safely before that.  The owner gave a nice offer of 25/- per bucket of hot water. Initially only Benny accepted the offer but then we all followed(all a leader need is one follower) and had a nice hot water bath. Since this was a homestay, most of us were together happily chatting for couple of hours.  Shuvo, Ruru sharing their different trek experiences…Good times!! Today was going to be our last connection with the villages. Tomorrow onward in the wilderness of Himalayas…

It was nice and easy walk. We started late since the distance was only 4 km. There was a steep climb for a very short distance, then a nice stretch through pine forest. Then once in a while some uphill walk, followed by a descent towards the river bed. Finally we reached the campsite Saatopani around 12:30. We were supposed to camp at Saruvas thatch but since another team was already camping there we decided to camp 2 Km before at Saatopani. Benny taught us how to pitch a tent that day.

By evening it started getting very cold. We decided to have a campfire. We played antakshri with guide/cooks/porters on one side and we on the other side. Unfortunately they were singing all bhajans and after some time our stock of bhajans finished and we jumped to more familiar movie songs. Only Reetu and I were playing… others were just sitting saying they don’t know any songs which I find very hard to believe ;-).

Today we have to walk the extra 2 km which we didn’t do the day before. It was a long walk along the river bed. We could have walked on the same side of river where our camp was but the trail was difficult because of earlier landslide. There were lot of loose stones. So we crossed the river and walked on the other side. We would have to cross the river again.

From far we could see snow-bridge with a small crevice. We had to cross the bridge. The crevice which looked small was not that small, we had to jump through it with our guide’s help. A small thrill in otherwise normal day.

Our guide told that steep climb is in store today… we will be at 14000 ft at the end of today’s walk.  By the time we reached there I could feel rarity of oxygen. I had a slight doubt in my mind if I could do last and final stretch tomorrow but then thought if I had come this far enjoying then I might enjoy the last stretch also. It is matter of few hours to acclimatise. After all, all these days walk and climb was in a way preparing us for the d-day!!! There was a small discussion if we want to climb the pass that day itself but then decided against it and took it easy…

The weather was great but it started getting colder and since we were in alpine region there was no way we could have a camp fire. It was getting colder as the day went by. We had early dinner and I went to the tent by 7 itself… I woke up at 4:30 and came out of the tent and I had the most amazing sight of my life till then. Never in my life had I seen so many stars in the sky. There was hardly any space left in the sky…stars were fighting for the space up :).  I immediately woke up Reetu also. When I started for the trek I wanted to see a clear blue sky and a sky full of stars and both had happened.

Day- 7: Raatipheri to pass and then to Sangla Kanda

There was frost everywhere in the morning but it soon became nice sunny weather. I decided to go slow today. Didn’t want to go breathless as soon as I start climbing. It was a short walk followed by one and half hour steep climb through the moraine zone, to the pass.  There were loose stones which would otherwise be buried inside snow during summer. One careless step and you will slip down. We had a welcome small break as VIPs (mountain goats) were coming. By 11 am we reached the top… my first successful trek… A mountain top (even if it is a very small one) always gives a kick.. We spent some time there, took pictures and finally took off. Today we have a long walk.

After descending through the rock zone a long downhill walk through the Thatch/Bugyal (high altitude meadows) followed. We had lunch at Ronti gad (it was to be the campsite but then decided Sangla Kanda to be the camp-site). I started getting nauseated just as I opened by lunch. I decided not to have lunch and just walked.  The walk was not coming to end. This was the longest we had walked. We reached the camp by 5 pm.

I don’t know if others also feel the same. When I climb-up I think descend is better and when I descend I feel ascent was much better. Now I have kind of concluded that I like climbing up than coming down.

We celebrated the pass in the evening with a short campfire. A feedback session and general discussions followed before the dinner.

Started late from the camp. It was another long descent of 5 km through apple-orchards. Of all the days this was the worst day. Loose dry stones, dust and a very hot day.  We reached Sangla by noon. Freshened up and just roamed around Sangla town. In few hours it will be time to go..

I had a flight next day evening from Chandigarh. We took two vehicles to Rampur. Reached Rampur around 9 pm. Reetu and I were leaving for Chandigarh and others were staying till morning. Finally it was all over. And now I want to do more of it.