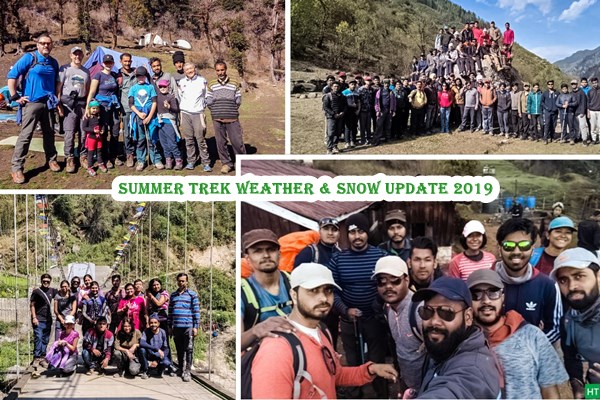 By this late April 2019, lowlands of India already facing a promising spell of summer. Temperatures steadily charting over 40° C. Many of you have already booked your tickets to the Himalayas for a respite. Some of you surely finalised which trek to go, some yet digging in to chose the right one.

It is a good time to get an update about how spring ended on mountains this year 2019. Here are the treks that we finished from 10th to 20th April.

Also it will help you to check the current snow conditions till the end of Spring (late April) in different regions like Uttarakhand and Himachal Pradesh (around Kullu Manali valley). Furthermore to get an idea about how much it would be remaining in coming months May and June.

Last winter, i.e. 2018-19 was normal in its course and snowfall was good. Due to steady snowfall in winter till February 2019, deposited snow on high altitude is as expected and not low/minimum like last 2/3 years. In our assumption:

The weather upon on Sikkim/Darjeeling was usual in the end of spring. Some cloud, mist, showers, and views of the mountains as well.

You can get an idea of current weather and forecast for Sandakphu here.

Here are some photos we received from the team members:

Good amount of deposited snow at ~ 3500 m/11500 ft. Trails are covered with snow above 3000 m/10000 ft, as of late April. We anticipate that residual and scattered snow will remain on treks like Har Ki Dun, Kedarkantha, Bedni Bugyal, Kuari Pass till mid May. High altitude treks going above 15000 ft will have more than 2 ft of snow by mid May.

You can get an idea of current weather and forecast for Har Ki Dun here.

You can get an idea of current weather and forecast for Dayara Bugyal here.

Treks around Manali has not really opened till late April due to heavy snow. Only a day hike or two is comfortable at present. Up to one foot of deposited snow at ~ 3000 m/1000 ft mark. In our estimation routes like Beas Kund, Bhrigu Lake will open to all around mid May or later this year. Teams will probably start crossing Hampta Pass from beginning of June 2019. All routes around Manali will have residual snow in June 109.

Final take on treks for this summer of 2019:

All pictures are shared by HT trekkers and staff.