Exploration around Donali glacier in Kishtwar 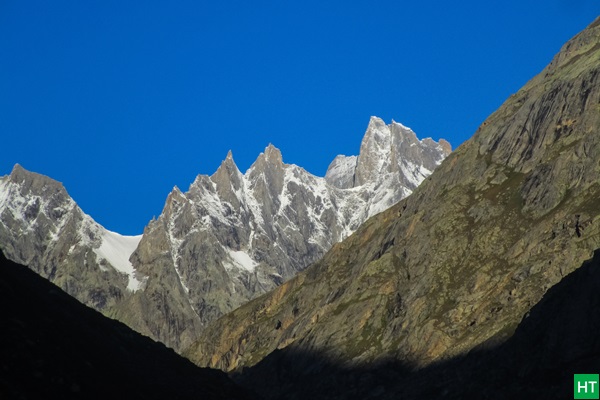 Nestling on the north-east bank of Chenab between Kashmir to the north and Chamba-Lahaul to the south, lies the mountaineer’s playground of Kishtwar.  As Harish Kapadia wrote  in his book EXPLORING THE HIDDEN HIMALAYA “Kishtwar is the small parties hunting ground, there are innumerable valleys which are yet to be visited and the sheer variety of rock and ice formation is enough to satiate most ardent alpinst even if he/she ignored the prominent summits, all one has to is to change in to a higher gear of technique and in to lower gear of ego and mania for height records”.

This sounded perfect for our vision of mountaineering.  Indian mountaineering foundation reopened the region since 2010 for climbing. This resulted in a series of cutting edge first ascents in impeccable style by worlds leading alpinsts coming from various countries. Elegant lines were climbed on Cerro Kishtwar, Hagshu, Arjuna, Brambha I & II, Kishtwar shivling to name a few. Leading alpinst’s like Stefan Seigrist, Thomas Huber, Marko Prezelj, Hayden Kennedy, and Mick Fowler all had left their mark with stunning first ascents. Although Donali glacier received less attention, the only information we could gather about the region is from a report published in American alpine journal when in 1979 a British team attempted Arjuna from the east side.

So when our good old friends Tad McCrea and Jon Griffin from United States decided to explore the Donali glacier region,  we readily grabbed the option. On late August of 2018 Tad and Jon arrives in Manali along with Caro, Whitney and Joss. These three girls are also good friends; their plan is to attempt a new line on the west face of Arjuna (6230 meters). They will go up the Kijai Nala, during the same time we will enter the Bhujnu Nala. We left Manali on 31st of August early morning, four jeeps 10 people carrying the entire expedition luggage. Our goal was to reach Gulabgarh in one day. It was a long and arduous journey through treacherous and at time dangerous road conditions, especially the road from Killar to Gulabgarh, where in sections we travelled on narrow dirt road cutting through sheer granite cliffs.

After a day of organising and completing formalities with local authorities, we left Gulabgarh for the mountains. The wide hiking trail passed through the villages of Chisoti, Hamori and Machail. The road littered with garbage notably plastic wrappers was surprising. Clearly the result of Machail yatra a popular pilgrimage to the Durga temple situated at Machail village. After arriving at Machail we had some difficulties with the horses and this cost us few precious days. On 7th of September around 4 pm we arrived in front of the white waters of Bhujnu nala fed by east and west Donali glaciers. To access the Donali glacier we had to cross the nala and get to the other side of it. Crossing the nala was challenging, the rapids were too strong to cross them on foot.

Luckily Tad and Jon had their pack raft with them as they had plans for descending the Bhujnu nala after the climbing part of expedition. Jon an experienced river guide pack rafted his way to the other side. He sets up the Tyrolean and i went first. In an hour Tad, Jibbi and others arrives with the entire expedition luggage. We have found a beautiful little meadow with flowing creeks and decided to set up our basecamp here, the altitude reading of the basecamp read at 3500 meters. This will serve as our home for the next few weeks. We look forward to these coming weeks, excited about exploring unclimbed terrain in seldom visited valleys.

During the first weeks our goal was to get acclimatise and set up the high camp for our intended objectives. The glacier was not in good condition; long stretches of terminal moraine seated precariously above slowly melting glacial bed, and made travelling through the unstable moraine very dangerous. One can see how much the glacier has receded.

The cirque of the upper West Donali is home to a plethora of unclimbed rock walls rises from south to north and then turns right towards the east. Our plan was to set up the high camp at the start of the West Donali glacier.

Continuous spells of heavy rain halted our progress as we were forced to spent lot more days in basecamp than we intended. During the short spells of good weather that we got in between we shuttle some loads to our high camp. On 19th of September we moved up to the high camp with five days of food and fuel. Our goal was to try to climb one of those steep unclimbed rock walls. The cirque has a lot of resemblance to the famous Charakusa valley of the Karakorum’s. Our plan did not materialised, on 20th a major storm broke out and forced us to stay inside our tent for two consecutive days. We could hear rock fall and avalanches all around us. As condition detained we decided to get down to basecamp. It was full blizzard condition with complete white out. Tad led the descent, finding route through the glacier in these conditions was a masterful display of route finding. We were back to basecamp by evening.

The weather improved on the next day with clear sky and bright sunshine. On 25th we moved up to the high camp again to give it another shot. We reached the high camp to find our tents completely buried under the snow, we dug them out and settled in for the night.

We intended to leave early morning next day and reach the base of the wall by evening, rest for the night and start around 3’o clock in the next morning. The progress was slow, through the waist deep snow at times and it exhausted us, we decided to rest and camp at start of upper glacier. The next morning we started early, climbing through the icefall to reach the ice fields of the upper glacier, which will lead us to the west ridge of the rocky pyramid shape peak that we intended to climb. We climbed up the steep ramp (60-70 degree) on the western flanks to reach first rock pillar of the west ridge. We found a steep gully that we hope will lead us through the steep pillar to gain a shoulder on the west ridge. From there it looked like another few hundred meters of steep rock climbing will lead us to the summit. This is the moment that defines alpinism, when the alpinst will get a chance to test his/her own limit and get to know about the mountains intimate features. One has to focus hard and fully aware of his surroundings, to play this game.

“Breathe breathe” this two words echoed on my mind as I swapped my feet to regain balance on a tiny foothold and looked up, the steep gully continues upwards without much relief. Deep inside the Donali glacier we found what we were searching for ADVENTURE, I moved up the steep rock gully using the hand and footholds it provided, It is very strenuous to climb like this, not only it is technically difficult but also at this altitude @5000 meters lack of oxygen make the heart beat faster forcing me to frequently stop and take rest. After climbing for another half an hour I reached a small stance on rocky ledge and decided to set up the belay. Looking upwards I can see the gully has narrowed considerably and rock wall have closed in, difficult steep ground awaits us. Jibbi followed the peach with a heavier sack, as he reaches the belay we started discussing our options. The only way forward was to climb up the difficult at times overhanging terrain. Jibbi started leading this pitch, progress was slow, finding protection placement was challenging , we also did not had any aiders with us which made things more difficult. After an hour of effort he decides to bail, he placed couple of pitons and i started lowering him. He was around 20 meter above the belay and we were climbing on a 70 meter rope so lowering him to the belay was not an issue. Again at the belay we had a discussion; the terrain above is proving very difficult with overhanging sections compiled with little opportunity to place protection. We realised that we don’t have any other option at this moment, we have to go down.

Around 4 am at night we came back to high camp. The snow condition has deteriorated a lot; crust was so thin that we sank almost at every step. Tad & Jon has also abandoned their attempt on Arjuna due to very poor condition on the face. We slept for a few hours at the high camp and next morning started our descent.

The Donali has not allowed us this time, but we learned a lot about ourselves and the mountains and even before leaving the glacier dream start again, and in pursuit of that magical dream we will be back.

P.S.: All photos are shared by Spandan Sanyal. For rock climbing (on Himalayas and others) you can reach us at [email protected]

Korak Sanyal
Korak (nicknamed Nibbi) is a highly passionate rock climber and has been climbing extensively together with his twin brother Spandan (nicknamed Jibbi) for a decade. He is dedicated in exploring all the styles from hard boulders & sport climbs to remote alpine rock climbs in various parts of India. As aspiring alpinists, the duo prefer to explore unclimbed terrains in minimalist style rather than aggression for height records. His notable ascents include Mahalaya - Lalung valley. Zanskar, IV 5.10b R, 550 meters; Millennium crack - Badami 7a trad climb; Samsara - Badami 8a sport climb; Smiling goddess - Chhatru Fb 7c boulder problem;
Previous postSankri – A comprehensive travel guide on Tons valley
Next postSolo Sikkim trek option in low altitude during summer