Hot springs of Himalayas – A future source of self sustaining clean energy?

Hot springs of Himalayas – A future source of self sustaining clean energy? 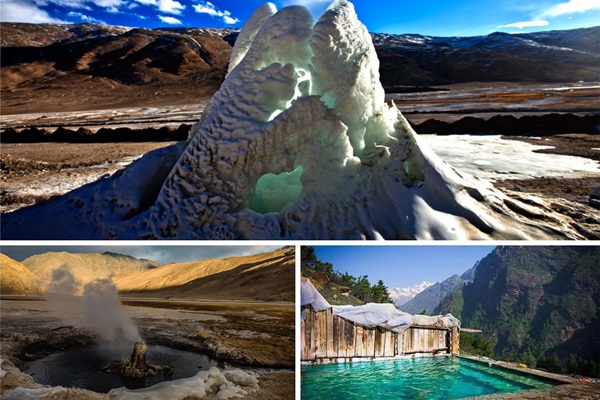 The hot springs of the Himalaya are located in the zones of deep faults that define tectonic boundaries between the Himalayan province and mainland Asia ( Indus – Tsangpo Suture, I-TS), between the Great Himalaya and Lesser Himalaya ( Main Central Thrust, MCT) and in between the Siwalik domain and the Lesser Himalaya (Main Boundary Thrust, MBT). The geo thermal activity is highest in the Ladakh region where heat flow is of the order of 300 mW/m2. Heat flow in the hot springs along the MCT have an average rate of  130 ± 30 mW/m2 whereas the average rate of heat flow in the MBT region is of of  41 ± 10 mW/m2 .

Clearly the Indus-Tsangpo Suture has the greatest potential in the Himalayan region. One such “hot-spot” of the ITS region is the Puga hot spring area located in Ladakh. It covers an area of 15 km2 and this single spot has the potential of 5000 MWh of energy.

Jonathan Craig, honorary professor at University College, London, and the University of Jammu, published a paper in May, 2013 on this subject. According to him “A 20 megawatt geothermal plant at Puga could save three million litres of diesel burnt annually in the region at a cost of approximately US$ 2 million,”  “Such a plant” he adds “would eliminate the need for traditional kerosene stoves and gas-operated heaters during winter and prevent the emission of some 28,000 tonnes of carbon dioxide.”

Geo Moore, a geologist at the Energy and Geosciences Institute, University of Utah, told a conference on sustainable resource development held in the June, 2014 in Leh , “I hope lessons from elsewhere in the world can help harness these resources in the Himalayas,”

Rhik
Rhik works as a new route explorer, photographer and trek coordinator for HT. He completed his BMC from HMI and AMC from NIM.
Previous postWeek long homestay trek option in Sikkim or Darjeeling
Next post2019 – Post Monsoon Autumn trek updates in Himalayas