Kedarkantha or Brahmatal: Which trek is better?

Home » Trek Insights » Kedarkantha or Brahmatal: Which trek is better?

Kedarkantha or Brahmatal: Which trek is better? 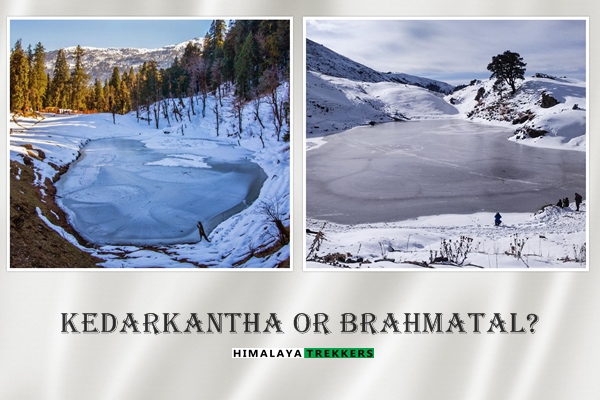 Be it Kedarkantha or Brahmatal, surely both will make its place among the best winter snow treks in India. But what, if you have to pick any one of these two? Is one better than the other?

The question is simple but the answer isn’t! Neutrally speaking, you need to visit both before reaching a conclusion.

Let us quickly go through some facts about these two treks. There are quite a few similarities between these two trails, both suitable for beginners during winters. Yet, we need to choose one, right?

The above really doesn’t help to pick one, but justifies you can choose any one, due to their similarities in varies aspects. It is really difficult to decide which one is harder or easier, isn’t it? Moreover, terrain variety wise these are quite similar due to their similar altitudes.

To decide between Kedarkantha and Brahmatal trek, the answer mainly depends on:

1. Kedarkantha or Brahmatal: When to go for which trek?

Even as both are winter snow treks, the amount of snow varies to an extent on these trails. You need to plan any of these trek, according to its expected snow conditions. Otherwise you may end up trekking on snow less trail or too heavy snowy conditions. Now we will discuss which one probably better to visit at a given time.

Mid of November to mid of December: Kedarkantha normally receives early snowfall comparing to Brahmatal. If you wish to get some snow, you would surely be inclined towards Kedarkantha during early winters.

Mid December to end of January: In the course of this stretch, usually Brahmatal gets 2/3 snowfalls. Whereas snow on Kedarkantha steadily grows. You may choose either of the trek. No clear winner here.

February to early March: During late winter snow condition is harsh and challenging. Often Kedarkantha remains buried under heavy snow and indeed pretty  difficult to summit. Brahmatal is a wise choice this time.

Mid March and late April: Residual snow on Kedarkantha makes it a clear choice during spring.

May & June: No clear winner this time around the year. Both trail will turn green in summer.

2. Which of these things you like more in Kedarkantha or Brahmatal?

Although it is tricky to assess which of the following is your priority, but may be helpful for favouring one to another. Take a look here:

Also you may like to write your opinion or questions in the comments. You are most welcome!